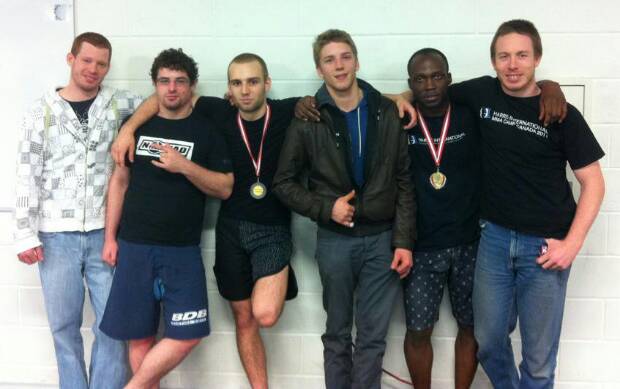 We had 5 competitors attend the event.

Maxime was the very first fight of the day. He had a scheduled super fight against ex- judo competitor and current ringside champion Oliver Aubin-Mercier. Max applied his usual game plan of working from butterfly guard and playing the sweep game. Oliver made it very difficult for Max to gain control of him. Max was able to almost establish x-guard, but but his opponent would slip out of the position. Oliver was able to pass Max’s guard with a nice back step guard pass, before he transitioned to north south anf finished max with his patented inverted triangle choke. Maxime showed a lot of heart against a very tough opponent. We’re looking forward to his next competition.

Louis brought home a silver medal after 5 matches in total. He won 2 with 50/50 guard ankle locks, and one with a rear collar choke. Nice work Louis!

Benoit was placed in a combined division. 190 and under and the 190 and over blue belt division which had some giant competitors. He won 2 out of 4 fights, winning one on points and one with a slick armbar. He didn’t place, but had a good performance against some pretty tough competition.

Fabian enter the gi competition for the first time, he won 2 out of 4 fights. A great first showing

Mistral was awarded a gold medal after 4 fights, including one match against team mate Benoit. He had some difficult matches, and really showed an ear for coachability through some tough moves. Great work on the gold!

Fabian received a silver medal after 6 fights, showing that he is much more comfortable without the pyjamas. Highlights included a slick back take to rear choke, and a high guard armbar.

A great showing from all of our competitors. We’re looking forward to the next competition with our team!