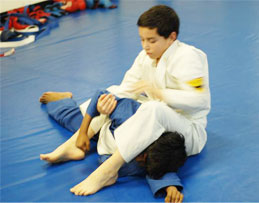 Louis had 3 really good fights to get to the finale.

His first match was a grind, that was a little back and fourth. Louis had to escape a kneebar at one point. Fortunately he was able to end the fight with a rear naked choke from the body triangle!

His second match was fairly quick, pulling guard and slowly transitioning to his 50/50 guard. He worked his way into an ankle lock for the finish.

His final match invovled a lot of 50/50 guard play. Louis was able to get sweeps and the mount position, but the rules state that you must win by a submission. After the 10 minute round ended, they went to overtime. The overtime fell under sudden death rules, the first player to score a point wins. Louis was able to pull 50/50 and achieve a sweep for the point and the win and the GOLD!

Louis also jumped into the Advanced Absolute Division, where he had 2 matches.

His first match had a lot of excellent back and fourth action. With leg lock attempts on both sides. In the end Louis was able to secure a tight ankle lock from the 50/50 guard for the win.

Louis had a really tough final match, where he had to extract himself from a few tight spots, including back mount, and a triangle choke! A great final fight. Ultimately Louis was able to lock on a Darce Choke, which he then proceeded to use to transition to a successful standard Triangle Choke. A truely exciting match.

Even though Nomad BJJ only had a single competitor, we were able to achive 3rd place overall for the 2 Gold Medals Louis won that day. Talk about pulling your weight Louis 😛

Thanks for the great fights Louis. Can’t wait for your next competition.

Advanced 145 lbs. and under